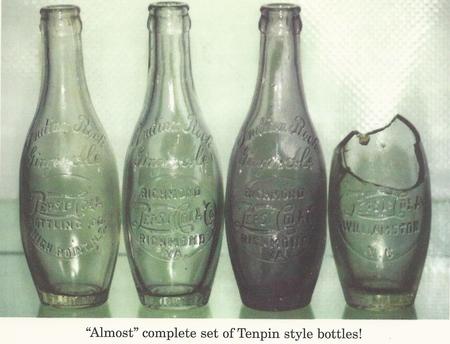 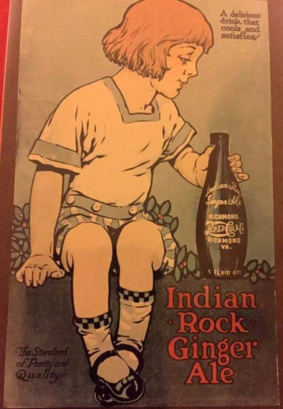 The Pepsi:Cola Bottles Collectors Guides by James Ayers list the bottles as being from the teens. The group of four variations come from James’ first guide dated 1995. At that time, he had 7 ounce ten-pin bottles from High Point, Richmond, and Williamston, all in North Carolina. The Richmond versions are the most common and were recently worth around $600 each  or  more. By the time his second book came out in 2001,  he had located a complete Williamston ten- pin. That version, as well as the High Point, were valued at around $3,000 each.

The cardboard display shown here was from the Terry K.  and Martha Lunt collection. The sign itself is a  great advertising piece, and the addition of an actual ten-pin bottle makes it even more desirable.

According to justanswer.com, “Indian Rock Ginger Ale was a product of the independent Adam Christian Company and bottled under the authority of bottlers of Coca-Cola, Pepsi-Cola, Celery-Cola, Mint-Cola and other bottlers in various towns. Only the Pepsi bottler used their script trademark on the ginger ale ten-pin bottle along with the Indian Rock script on the shoulder.”